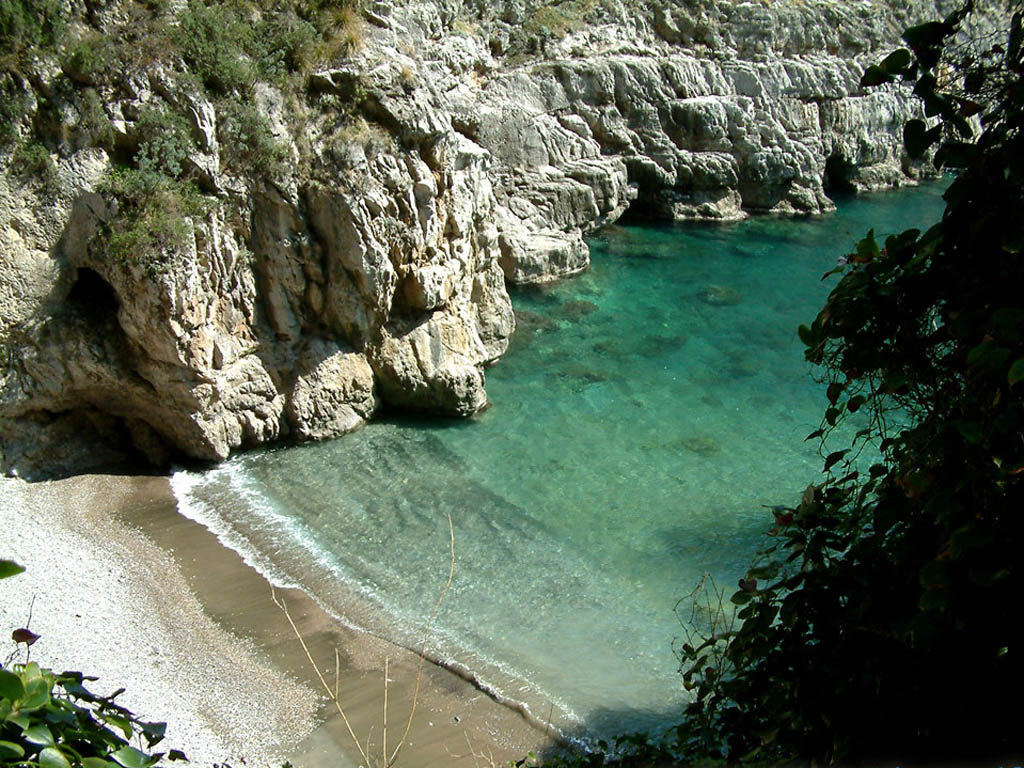 The Crapolla Cove is a charming and fascinating place: nature, sea and a rich history.

Crapolla Cove is one of the most beautiful sites along the coast of Massa Lubrense: in addition to be of natural interest, it still retains visible traces of the past. You can reach it on foot from the village of Torca: from piazza San Tommaso Apostolo take Via Nula and then Via Casalvecchio, where the trail to the fjord begins, indicated by the color blue.

Retracing the route of an ancient mule track, the first part of the trail runs among the green of the Mediterranean maquis and then along the brook Iarito up to the natural lookout “La Guardia”, where a stone bench invites you to stop to admire the wonderful view: in front, the three islands Li Galli, the islands Isca and Vetara; to the left, the Amalfi Coast and, when the air is clear, the whole Gulf of Salerno; to the right, the unmistakable silhouette of Punta Penna.

From this point it branches also the challenging path leading to the Beach of Recommone, marked with red and white color. The stone steps, almost 700, lead instead to the Crapolla Cove: every 50 steps, a ceramic tile indicates the consecutive numbering.

Before arriving at the fjord, you can stop to visit the small Chapel of San Pietro, built with the same stones that once belonged to the Black Benedictine Monastery, more commonly known as Abbazia di San Pietro. Next to the chapel you can still see some columns and marble bases belonging to the ancient building. The legend tells that the abbey had been built on the ruins of a Roman temple, built itself on the ruins of a temple dedicated to Apollo: from here the toponym Crapolla.

According to tradition, St. Peter landed in Crapolla on his journey to Rome. Every year on June 29, the day dedicated to St. Peter, the local faithful make a pilgrimage from Torca to the Chapel of San Pietro, where it is celebrated the Holy Mass; the festivities continue later on the beach among food and fun. The space in front of the chapel offers a privileged vantage point on the island of Isca. On the left, you can see the Mount of Torca with the Tower of Crapolla, belonging to the defensive system of the watch towers of the coast and the interior of the territory of Massa Lubrense.

Returning to the trail you finally reach the Crapolla Cove: a narrow and deep cleft in the rock, insinuating between the high cliff to a length of about 160 meters, widening gradually and ending with a beach that is as small as beautiful. In the western part there are still the remains of a Roman villa, with parts of walls in opus reticulatum. Before the beach, the old village has preserved the remains of some Roman cisterns and places carved into the rock: they are the monazeni, also structures dating back to Roman times and still used by local fishermen to repair their boats and fishing tools.

The small pebbled beach is in the shadow during a good part of the day. By contrast, for the almost total absence of shadow along the trail, we recommend to go back to Torca when the sun is less bright.