The Aragonese Castle of Annunziata reopens to the public

The Aragonese Castle of Annunziata reopens to the public 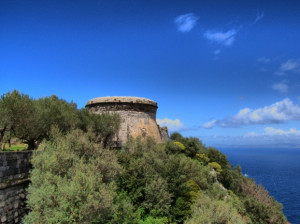 On July 6th, 2018 the Aragonese Castle of Annunziata, one of the jewels of the municipal heritage of Massa Lubrense, reopens to the public.

The Pro Loco Massa Lubrense – in collaboration with the Arciconfraternita SS. Rosario dell’Annunziata and the I. P. San Paolo – takes care of the opening.

“I am extremely happy and satisfied to be able to open a fundamental piece of the history of Massa Lubrense – says President Teresa Pappalardo. – My personal thanks go first and foremost to the Arciconfraternita, which enthusiastically adhered to the idea and with which a deep and fruitful collaboration is born, to make the place usable and welcoming. I’m thankful to the City of Massa Lubrense, which promptly responded to our request, and to the High School San Paolo with whom we have a school-work protocol that has led the student Francesco La Via to take care of the openings to the public. With the collaboration of the historian Gennaro Galano we are preparing a new brochure about the place, which we are currently translating into English to allow visitors to deepen the site, and we are drafting a series of events that will enrich the summer events season of Massa Lubrense.”

The hamlet Annunziata and how to get there.

Hot off the press the first issue of Massa Lubrense… what’s the story?!, a series of five volumes that leads his readers on a fascinating journey through the myths and history of our land, particularly rich in a past to discover and visit.

The book series is divided into the following periods:

The volume Prehistory, myths and Greek-Roman period focuses on the arc of time that goes from prehistory – with the earliest human settlements in the peninsula – to the eruption of Vesuvius in 79 AD. C. – infamous for the destruction of the city of Pompeii.

Protagonists of the tale and cartoon characters are those – such as the Massa’s mule, winged sirens, Ulysses – that gradually have become part of the imaginary of Massa Lubrense. The story revolves around the events that have marked the evolution of the Sorrentine Peninsula, and highlights the archaeological finds that the time has preserved until today. Special attention is also paid to places visited along our territory, shown in the map of Sorrento at the end of the work.

To support the project, we require a small contribution from € 3.00.