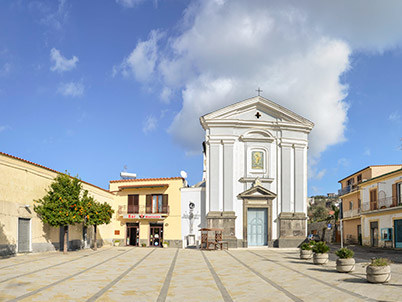 The hamlet of Monticchio is situated in a large valley, with a picturesque landscape and lush vegetation.

The main square where the church is located, is 315 meters above sea level; but the urban center rises again up the hill to beyond 350 meters.

We have news of Monticchio since 1221, at the time of the foundation of the old church of St. Peter; in 1723, however, the Conservatory of SS. Rosario was founded at the behest of the Neapolitan Cristina Olivieri.

Rebuilt in 1642, it preserved some altars of the previous church. In the 19th century marble altars were erected and important restorations followed in 1833 and 1881.

The church has a single and wide nave with an apse and dome, an ornate 18th century floor; the two sides of the nave house four chapels each.

Conservatory and the church of Holy Rosary

The monastery, built in the first half of the 1700s, has a church annexed to it which is accessed via a large staircase with two semicircular ramps. Both the majolica floor of the church and the cloister (with a panel attributed to Ignazio Chiaiese, a famous 18th-century Neapolitan majolica master) are worth a visit. You can request permission to visit the monastery.

It is the church of the monastery of that village, and had already been started in 1746, as Msgr. Pisani writes. It was finished in 1762, a date that can be read in the floor and on the organ.

The founder was Ignazio Chiaiese, whose portrait is preserved in the pious place. The church has an eighteenth-century facade and is preceded by a staircase with two semicircular ramps. The interior is baroque, with elegant architecture and decoration. The plan is a Greek cross with very short arms, and a large cross surmounted by a lowered dome with lantern.

It has, besides the major, two other altars, all in marble. In the first one a picture of the Blessed Virgin of the Rosary is venerated, in the one from the side of the Epistle a Supper in Emaus, in the other an Adoration of the Magi. All three paintings are the work of the same hand, and are rather valuable compositions.

The pious Neapolitan woman Cristina Olivieri since 1707 went to vacation in the village of Monticchio, where she was a guest of the Tizzanos; and during those residences she began to collect oblations with the intention of founding a monastery. With the money raised, Sister Cristina bought two small areas at the parish church, and having obtained the consent of Bishop De Rossi in 1723, invited the parish priest of Monticchio to bless the first stone, which was laid with a cross carved in the ditches where they raised the foundations of the pious place.

But this raised a general discontent among the citizens of Massa, who, having appealed, were summoned to parliament on April 4, 1723. Having put the question of the Monticchio monastery to a vote, 27 votes were obtained against it and only 2 in favor; then a plea was made to the Viceroy in which the reasons for the discontent were exposed, namely that there were far too many religious corporations that were there in Massa, and that they owned a large part of the territory, while the population was impoverished. But Olivieri entirely frustrated the appeal of the citizens of Massa, declaring to the Sacra Romana Church that she erected those buildings for her private use.

The opposition of the citizens and the defenses of the founder continued for several years, and permissive or prohibitive decrees alternated with the continuation of the construction. Meanwhile the building was progressing, and in 1732 it was largely made, while the sum of 4150 ducats had already been used, as the manufacturers declared on June 12 of that year. At this point the citizens raised new protests and the treasurer of the church of S. Pietro, saying that the conservatory was prejudicial to that church; but the admirable tenacity of Sister Cristina triumphed again, because the Viceroy decreed on May 24 that no ban had been made on the construction of the monastery.

But with the coming of the Bourbon government the controversy took hold again and the citizens on January 18, 1738 obtained from the Royal Chamber new prohibition to continue the building if it were for the use of conservatory; and the King conformed to this consultation with Dispatch of February 14. But on the 20th of the same month, the founder presented another petition to the Royal Chamber. After this, since no documents were found in the trials, it is to be assumed that Olivieri’s plea had to be heard. And this is confirmed by the fact that a few years later the conservatory was completed and inhabited by the nuns, so that Msgr. Pisani was able to visit it in 1746. The nuns present there accepted the rule of S. Domenico.

The building, of good construction, stands in a beautiful position west of the parish church of Monticchio.

HOW TO GET TO MONTICCHIO

To reach Monticchio by car, from Massa centro take Via Massa Turro. Then turn right following the indications. There is a place for the car along the road, in the blue stripes.

SITA buses between Sant’Agata sui Due Golfi and Massa centro stop at Monticchio – Bivio Titigliano. It is advisable to consult the timetable.