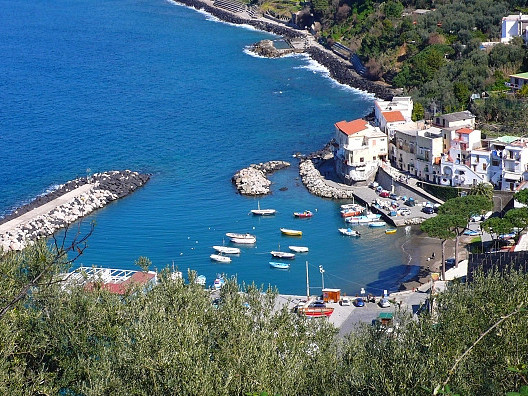 Enclosed in a natural bay on the coast, the ancient fishing village of Marina della Lobra is dominated by the Sanctuary of Lobra, to which it owes its name.

The town, a cluster of colorful houses, mainly populated by fishermen, is built around the steps leading from the church all the way down to the sea, and offers to the visitor an undoubtedly picturesque spectacle: a whole of sounds, colors and smells typically Mediterranean.

Marina Lobra is about 2 km from Massa Center and can be reached on foot or by car taking Via Palma from Largo Vescovado; on foot it will take about 15 minutes going down via Colombo. A pedestrian path connects the village to the Riviera San Montano.

In the summer many boats and organized trips leave from here, to explore the beauty of the lubrense coast, Capri and the Amalfi Coast.

Although there is not a real beach, you can swim from the cliff or use the solarium on via Chiaia. During the high season, this is the best choice for those seeking less crowded places. There are also nice little restaurants and bars overlooking the sea, in a privileged position to enjoy the spectacular sunset.

On the west side, the marina is protected by a cliff that rests on the rock wall of Capo Corbo, dominated by Torre Toledo, which is part of the system of watch towers placed along the coast in the Aragonese period. This tower was actually preexisting, dating back to the Angevin period and was later adapted by the Aragonese for defense.

Right across from the village of Marina Lobra, not even a mile from the coast, there is the characteristic rock of Vervece (from the Latin “vervex”, goat), a true marine sanctuary. Every year, the first or second Sunday in September, at the foot of Vervece a celebration is held in memory of all those who lost their lives at sea. After Mass divers offer a laurel wreath at the statue of the Virgin Mary, known as Our Lady of Vervece.

This statue was placed on a wall of the rock, 12 meters deep, in 1975 at the behest of Enzo Majorca, who the year before had won the world record for depth in apnea right near Vervece. But Mallorca is not the only one to have reached an important milestone in these waters, even the Marine Protected Area of Punta Campanella, founded in 1997, boasts excellent results.

Thanks to the work of protection of the Park, the walls of the reef teeming with marine life, a rare show of biodiversity.

How to reach Marina della Lobra

Marina Lobra is easily accessible by car, from Largo Vescovado in Massa Centro take Via Palma and continue until the end of the road. There is space for the car in the parking lot down the street or in the blue lines.