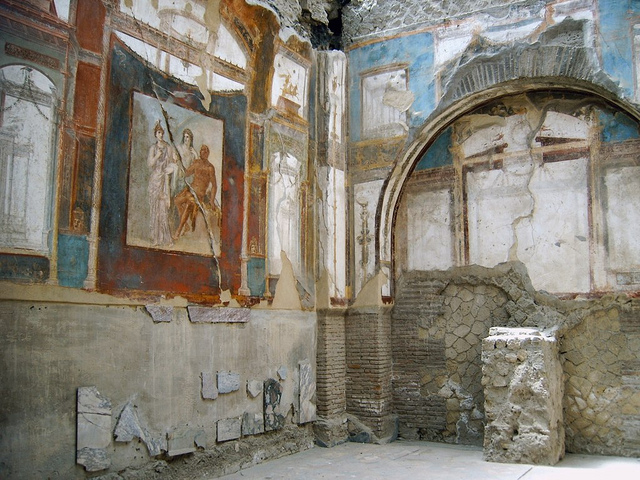 Herculaneum: pearl of the Gulf to the ancient Romans. 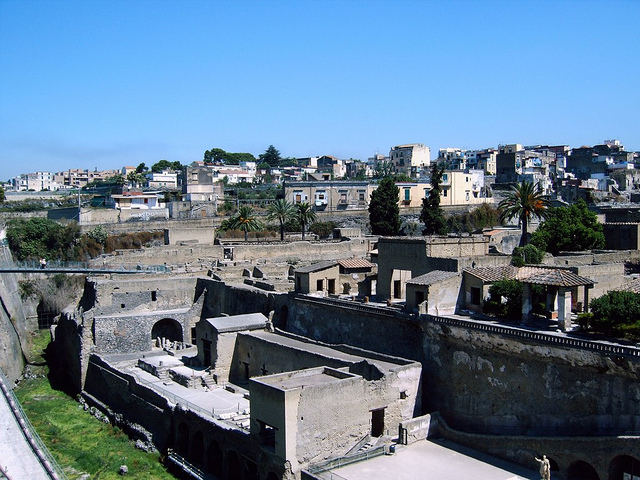 How to get to Herculaneum from Massa Lubrense

The archaeological ruins of Herculaneum have returned the remains of the old city of Herculaneum buried under a blanket of ashes, lapillus and mud during the eruption of Vesuvius in 79 AD, along with Pompeii, Stabiae and Oplonti.

Casually recovered due to the excavations for the creation of a well in 1709, the archaeological investigations in Herculaneum, began in 1738 untill 1765; Resumed in 1823, and stopped again in 1875, until a systematic excavation promoted by Amedeo Maiuri starting from 1927: most of the discovered artifacts are hosted at the Archaeological National Museum of Naples, while in the Archaeological Virtual Museum, built in 2008, the town before the Vesuvius eruption, is shown.

The site of Herculaneum, run by the special Government Department Responsible for the Archaeological Goods of Pompeii, Herculaneum and Stabia being visited on average by three hundred thousand tourists every year: in 1997, along with the ruins of Pompeii and Oplonti, it joined the list of UNESCO WORLD HERITAGE.

A walk down memory lane, throughout a multi-sensory experience, to know and discover in detail, the historical realities of Herculaneum and Pompeii before the eruption of Vesuvius in 79 AD.

This is the mission of the MAV, facility which rises in the heart of Herculaneum and which it guarantees a new modality of cultural use. The visitor will be transported in a virtual context faithfully rebuilt, through the use of the most modern technologies.

The journey begins after overstep a sort of ancestral door which it dematerialized the bodies in the flows of connective intelligence and which it leads to the discovery of the names and faces of the ancient population of Herculaneum, by which the history of the community and their life style, becomes known.

Along the Bourbon’s tunnel, the magnificent building of “Villa dei Papiri” can be saw, which in, the Greek philosopher Filodemo with his friends, they would gather in a garden similar to an Athenian Kepos.

The passing through a burning plume, is like the beginning of the rediscovery of houses and monuments of the ancient Vesuviane towns, showed in all its splendor; Roaming between such a lot of beauties an ancient chest can be saw, which it holds gorgeous jewels showed to the visitor in holographic form. Continuing the journey you walk in the library of “Villa dei Papiri” which it returns the fragments and the thoughts of philosophers and poets of Herculaneum.

Between voices, images and cries of market, you move in a room where an interactive table is placed, which it, at the slightest touch, shows customs and practices of the people who lived in the territory. Then, a dark corner lights up with some of the most beautiful Vesuviane wall paints, waterway in enlarged format, to show in details every gradient.

The practice of the idleness, for the pursuit of pleasure, belongs intimately to the Roman’s world, light thermal vapor introduce the characteristics paintings discovered in the brothels and in the suburban baths of the ancient Pompeii.

The last installation is an animated reconstruction of the Pompeii’s Forum, vital center of the city, which it suggests a summary of the place’s transformation during the last two thousand years, to the visitor. More than a cultural visit, a journey through the past, unique in its type

MAV+ Eruption of the Vesuvius

MAV for the family

From Tuesday to Friday:

Visit to the Museum+ showing of the movie 3D/mutliD “ Herculaneum and Pompeii 79 AD. The eruption of Vesuvius” €43,00 regular price for 2 adults + 2 kids

Visit to the Museum+ showing of the movie 3D/multiD “Herculaneum and Pompeii 79 AD. The Eruption of the Vesuvius” € 43,00 regular price for 2 adults + 2 kids

For each kid more € 8,00 from Tuesday to Friday, € 9,00 Saturday and Sunday. Special charges for the schools.